The History of the Mount Moriah Seventh-day Adventist Church

"...the Church was named Mt Moriah, a name synonymous with faith and sacrifice." 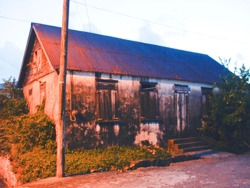 In April, 1975, Sis Inez McLean, who was an outstanding member of the Fountain SDA Church, pioneered the work with the group in Calliaqua when it became obvious to her that the older folks were unable to make the weekly trek for worship at the Fountain Church. In addition, commuting between Calliaqua and Fountain was an expensive undertaking for non-salaried folk. However, up to 1980, the quarterly pilgrimage was made to Fountain for the service of Holy Communion.

In 1981, Sis Shirley Buhler and her son Rick joined our congregation and in her unassuming but confident style, Sis Buhler spearheaded the move to conduct the Communion Service right at the Calliaqua Society Lodge which was our place of worship. This was sanctioned by our Pastor Andrew Farrell and thus our journey to Fountain came to a halt. By 1982, the group was voted to company status and subsequently in 1985 to Church status.

Several crusades were conducted by the Pathfinders, Sis Rebecca Cato, Bros Rick Buhler, Igal Adams, Michael Nicholls aka Lennox Hunte and the young vibrant evangelist Pastor Raulford Baptiste. As a result, many souls were added to the church!

Consequently, the membership outgrew our place of worship - the Children's Sabbath school was roving in the yards of various non-SDA neighbours, the backless benches had taken a toll on our physique, and on several occasions, many a gentleman had to rescue the ladies when it became noticeable that there were collisions between their shoe heels and the deep cracks in the floor boards!

In 1985, Bro Theophilus Huggins and his dear wife Eden returned from New York and the Lord guided them to worship with the Calliaqua brethren at the Society Lodge. Bro Huggins surveyed the situation and without any discussion, he gave the building a face-lift and built three real pews which are still standing. A breath of fresh air that was! In addition, the lodge was used as a multi-purpose centre thus we faced many serious problems- privacy and storage being among the chief.

Against this background, in 1982, we were adamant that the time had come for us to build a decent church where we could worship God in Spirit and in truth and unmolested, thus the search for land began. The price of land in Calliaqua and its environs was very, high and we had very little money. Squatting was mentioned as the alternative but as a law abiding group of people, most of us did not welcome that as an option. Naturally our Spirits were somewhat daunted. However, we held on with the assurance that the battle is not ours but the Lords.

In June 1983, after a 5.00 am prayer meeting, I discussed our plight with Sis Carol Brereton, who then indicated to me that she had made a covenant with the Lord to donate the best part of her land to erect a monument which would serve as a symbol of Gods grace towards her, and she added that she would gladly make that donation to the Calliaqua Church.

That bit of good news was communicated to the Church Board and in quick time the land was surveyed, the wheel track was constructed, the back wall was built and the foundation got under way. The unique fiberglass domes for the roof were completed by the end of 1985 and work on the building continued to progress until in 1986 when Hurricane Danielle struck and damaged the domes. But the Lord had a plan - the pieces were mended and it was work as per usual.

In that same year, 1986 Bro Rick Buhler who was spearheading the project left the State for medical attention thus Bros Vibert Matthews and Theophilus Huggins assumed the roles of foreman and co-foreman while Bro Nolwyn McDowall decided to work as architect, artisan and consultant.

Because the domes were built at a cost of $18000 our funds were depleted. Bro Theophilus Huggins made various trips to the United States working as Chancellor of the Exchequer and he was successful in this venture. 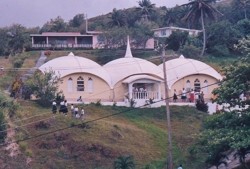 The Huggins and Straker families; which include Sir Louis Straker and his wife Lynda, the late Bro Winston Soleyn and his wife Ermintrude all helped considerably. Through the concerted efforts of Pastor Andrew Farrell and his intern Pastor Steve Phillips, much help was received from the brethren at Kingstown, Fountain, Belmont and Evesham, since at that time we all formed part of the Kingstown district.

In addition, individual members of the Kingstown church gave bountifully towards the purchase of windows. Bros Bertram Bacchus, Joel Woods and Nathaniel Jack gave handsome cash donations. Our brethren at Windward Lowmans and Sandy Bay sacrificed many Sundays to help with the intricate parts of the masonry. The brethren at Calliaqua continued to make sacrifices to the cause of God.

Work continued to progress despite the serious hurdles in our path. We prayed and longed for the day when we would be ushered into our new building. Finally, the building was completed and on Sunday 19th July, 1987 the church was dedicated to the glory of God.

Pastor Everette Howell, President of the East Caribbean conference of SDA laid the cornerstone. By the end of July, the Church was named Mt Moriah, a name synonymous with faith and sacrifice.

We have had our challenges. By 1989, migration had taken a toll on the Mt Moriah congregation. Very many of the stalwarts- the young and not so young from the fledgling group had left for the USA and Canada. However, in the same breath, we have had our successes. New members have joined the congregation through baptism and transfer and they have been making a very worthwhile contribution. 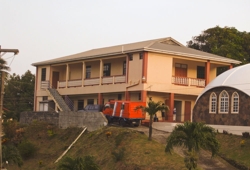 By 1991, it became evident to the leadership of the Mt Moriah Church that we needed a more all-encompassing Children's Division. Thus Sis Carol Brereton donated a second parcel of land to the church for that purpose. By this time, Bro Eustace Gulston and his wife Jean were members of the congregation. Bro Gulston proposed a bigger project  a Youth Development Centre which would cater for the needs of the children and Youth of the church and community. The members with their Pastor, Dermoth Baptiste were anxious to start construction work with the funds that were available since members had continued to contribute to the building. fund. Work started in 1992.

The Mt Moriah church members again sacrificed time, talent and money to see the completion of the ground floor of the Youth Development Centre. Phase 1 of the Youth Development Centre was completed by January, 1995. It was the Home of the Childrens Division, and it was also used to host dinners, camps, cooking classes, wedding receptions and other social events for the Church and the Community.

With this hive of activity, it soon became apparent to us that the building was not used primarily for the Childrens division. The solution therefore was to complete Phase 2 of the Youth Development Centre. The Gulstons had returned to their homeland Antigua, Bro Huggins was willing to work but he was not as agile as before, and in his own words, he preferred to give way to Bro Franklyn Haynes - a talented civil engineer. Bro Haynes was baptized during the Pathfinder Crusade which was held in 1999. In September 2001, under the leadership of Pastor Edward Smith, the Church Board established the Building Committee with Bro Franklyn Haynes as the Chairman. The other members of the Committee are Bros Kenriff Richards, Theophilus Huggins, Ozan Swift, Joel Williams, Cuthbert Noel and Sis Doren Simmons. Work on Phase 2 began in March 2002 thus the top Floor was completed for dedication on Sunday 7th December, 2003. We now have a facility which can accommodate at least 200 people for conferences and so forth without disrupting services for children and adults alike. Many groups including SDA from several churches in the Eastern and Southern Caribbean have been using the facility for camping purposes. To God be the glory.

Seventh-day Adventist beliefs are meant to permeate your whole life. Growing out of scriptures that paint a compelling portrait of God, you are invited to explore, experience and know the One who desires to make us whole.

We use cookies to personalize content and ads, to provide social media features, and to analyze our traffic. We also share information about your use of our site with our social media, advertising, and analytics partners.